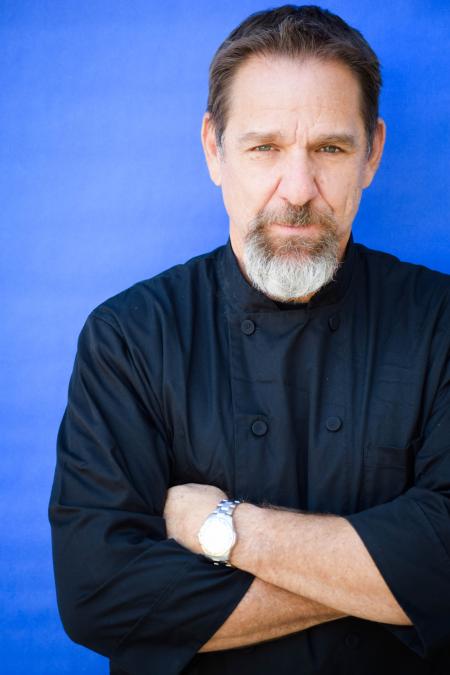 Derek attended culinary school in New Jersey at Hudson County Community College and completed his internship in a small French restaurant, La Apricot, in Hoboken. La Apricot had a great saying – “The Plates Are Our Canvas” – that stuck with him even after he left. After graduation, Derek worked on a catering boat on the Hudson River. When summer ended, he moved to St. Louis and began working at the Marriott. He reopened their bakery (which had previously been closed for three years) and gained a significant amount of experience working in their catering and fine dining departments. The job was great, but St. Louis wasn’t working for Derek – so he moved back to New Jersey, where he took a job in New York at a classical French restaurant (Le Jockey Club). Working there was a great experience for Derek – in just one short year, he graduated from being a line cook to becoming a sous chef. Eventually, he decided to move back to Los Angeles and began working in Malibu. He became a sous chef at Splash Restaurant, and when it turned into Monroe’s Restaurant, he became their executive chef.

Six years later, Derek was offered a job as a corporate chef for the restaurant chain Koo Koo Roo. Derek was integral in helping Koo Koo Roo open 38 new storefronts and worked on an array of projects for them (including restaurant/kitchen design, menu development, photoshoots, ingredient procurement, food costing, and more). He also trained and worked with the kitchen managers to ensure that everyone was trained properly and every single menu item was prepared correctly. Koo Koo Roo eventually purchased Hamburger Hamlet, and this became another project that Derek was able to take on (helping with menu development, etc.). When Koo Koo Roo was purchased by Prandium Inc., Derek assisted with menu development in Prandium’s other restaurants, El Torito and Chi Chi’s. The president of Prandium eventually brought Derek with her to Boudin Bakery as the Director of Research and Development, where he continued to assist with similar tasks as the ones he did during his time at Koo Koo Roo.

Derek took a short break from the food industry to help a friend expand his business and to spend quality time with his family. After a few years away, he realized he needed and wanted to return to what he was truly passionate about – food! Prior to joining the Team Play Events/ Foodie Booth Catering family, he worked at Monrose Catering, where he had the opportunity to create exciting dishes at fabulous locations. Derek began working at Team Play Events/ Foodie Booth Catering in 2018 as head chef, and is now in charge of overseeing the kitchen and its staff, assisting with menu development and execution, and providing amazing, quality food for more than 150 events (with groups ranging from 25 attendees to over 6000!) a year.